Tarsal coalition is a condition where there are abnormal connections between bones in the back of the foot. The condition mostly occurs during development. The connection reduces the motion between those bones and causes pain. Treatments include custom orthotics and stable shoes to minimize motion between these bones.  Surgery may be needed to remove these connections or fuse the joints.

What Is a Tarsal Coalition?

A tarsal coalition is an abnormal connection that develops between two bones in the back of the foot (the tarsal bones). This abnormal connection, which can be composed of bone, cartilage or fibrous tissue, may lead to limited motion and pain in one or both feet. 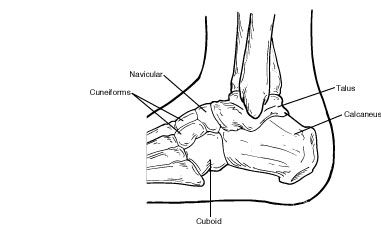 The tarsal bones include the calcaneus (heel bone), talus, navicular, cuboid and cuneiform bones. These bones work together to provide the motion necessary for normal foot function.

Most often, tarsal coalition occurs during fetal development, resulting in the individual bones not forming properly. Less common causes of tarsal coalition include infection, arthritis or a previous injury to the area.

While many people who have a tarsal coalition are born with this condition, the symptoms generally do not appear until the bones begin to mature, usually around ages 9 to 16. Sometimes no symptoms are present during childhood. However, pain and symptoms may develop later in life.

The symptoms of tarsal coalition may include one or more of the following:

A tarsal coalition is difficult to identify until a child’s bones begin to mature. It is sometimes not discovered until adulthood. Diagnosis includes obtaining information about the duration and development of the symptoms as well as a thorough examination of the foot and ankle. The findings of this examination will differ according to the severity and location of the coalition.

In addition to examining the foot, the surgeon will order x-rays. Advanced imaging studies may also be required to fully evaluate the condition.

The goal of nonsurgical treatment of tarsal coalition is to relieve the symptoms and to reduce the motion at the affected joint. One or more of the following options may be used, depending on the severity of the condition and the response to treatment:

If the patient’s symptoms are not adequately relieved with nonsurgical treatment, surgery is an option. The foot and ankle surgeon will determine the best surgical approach based the patient’s age, condition, arthritic changes and activity level.