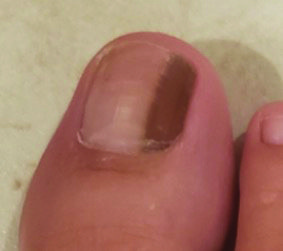 The following two researchers give warning signs for melanoma cancers with dark lines on nails.

Learn about other causes of dark lines on toenails.

According to Baran and Dauber, suspicion of melanoma includes the following:

1. begins in a single digit of a person during the sixth decade of life (50’s) or later;
2. develops suddenly in a previously normal nail plate;
3. changes, including darkening or widening (especially towards the back of the nail);
4. occurs in either the thumb, index finger, or big toe;
5. occurs after a history of digital trauma;
6. occurs as a single band in the digit of a dark-skinned individual, especially if it is in the thumb or big toe;
7. appears with blurred as opposed to sharp borders;
8. occurs in a patient with a prior history of melanoma;
9. occurs in a patient identified as having increased risk for developing melanoma, such as a patient with family history of melanoma or dysplastic nevus syndrome;
10. occurs with misshapened nail, destruction or partial nail plate absence.

According to Levit and colleagues, suspicion of melanoma includes the following:

• A. Age: Range 20 to 90 years, peak fifth to seventh decade (40’s-60’s), African-American, Native American and Asian races.
• B. Band. Pigment is brown-black. Breadth is greater than or equal to three millimeters. Border is irregular or blurred.
• C. Change. Rapid increase in size or growth rate of band. This can also refer to a lack of change, or failure to improve with treatment.
• D. Digit involved. The thumb is the most common digit involved followed by the big toe and index finger. A single digit is more worrisome than multiple digits. Dominant hand involvement is more common than that of a non-dominant hand.
• E. Extension. Extension of pigment beyond the nail to the skin to the back, side (Hutchinson’s sign) or tip of the nail plate.
• F. Family or personal history. Previous history of melanoma or dysplastic nevus syndrome.

If you suspect that you have melanoma cancer according to either of the criteria above, please contact Dr. John Hoy at Seattle Foot and Ankle Center in Seattle, Washington, to discuss a biopsy procedure to rule out cancer.