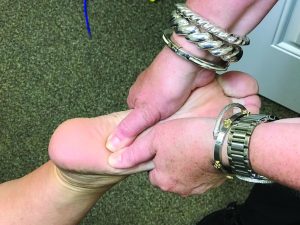 Cuboid syndrome is when the cuboid slips out or subluxes from its resting place behind the fourth and fifth metatarsals, a sprain of the ligaments that support the cuboid bone of the outside of the foot.  It is also known as locked cuboid, dropped cuboid, or peroneal cuboid syndrome. It is caused by an eversion rotation of the cuboid out of position.  Typically, the culprit is certain movements/vectors of force during gait that occur in dancers or athletes. Most often, there will be no major precipitating trauma event like a twist or fall. However, patients may recall how they had a quick “lateral” like movement or pivoting type movement as the initial precipitating event.

For example, a tennis player or basketball player runs quickly to the net or basket for a shot or backhand shot, and the foot turns internally with a quick lateral-like stopping motion. This quick lateral force can allow the cuboid to sublux out of place as the foot rolls unchecked into supination.

As another example, consider a high school student running around in the hallway, cutting and weaving in and out between other students. With a sudden, quick, pivoting movement, the cuboid subluxes out of place. There is no significant injury, but when questioned the patient recalls running through the hallway. Any quick eccentric pull of the peroneus longus tendon can have a rotational effect on the cuboid, rotating it out of its resting position.

The patient will have point tenderness on the cuboid while manipulating the cuboid top and bottom, and with touching the notch and ridge area. Occasionally peroneus longus testing will cause some mild discomfort.

Dr. John Hoy of the Seattle Foot and Ankle Center is an Associate of the American Association of Podiatric Sports Medicine.  He is a sports medicine and injury specialist practicing in Seattle, Washington.  We provide treatment for this and other types of foot and ankle injuries.

Treatments of cuboid dislocation syndrome include: